“Don’t go to Puerto Viejo!” they said and of course that alone made me curious. Puerto Viejo is located in Limon, which is a province on Costa Rica’s Caribbean coast. Majority of the people in Puerto Viejo are of Caribbean descent and speak with an accent. Ok, I think that’s enough background information. Now let me tell you about my crazy weekend. First off, a few of my classmates and I thought it would be a good idea to go out on Friday night when we knew we were leaving San Jose the next morning at 6 am. We ended up going to a Roots & Reggae bar called Surf Spot Bar.

Ok, fast forward a few hours and 7 missed calls. I frantically wake up to my classmates telling to hurry up and get dressed because they’re almost at my door. Thankfully, we were able to get to the bus station in San Jose on time. The bus ride from San Jose to Puerto Viejo took about 4 1/2 hours. Once we got to Puerto Viejo we went to our beachfront Hostel – Rocking J’s. Without hesitation we decided that we needed to go to Playa Cocles which was a 10 minute walk away.

After going to the beach, we went back to the Hostel and hung out for a bit and then went into town. When we arrived back to Rocking J’s from town we watched a live fire show.

After the fire show ended we went back into town and went to a bar called Lazy Moon which played nothing but Roots, Reggae, and Dancehall (so of course, I was definitely in my element). We stayed at Lazy Moon until about 1 am and then went back to the hostel since we knew it would be a very early morning.

I woke up at 6 this morning (I’m really not a morning person) just so that I could enjoy the time that I had in Puerto Viejo. We decided that we wanted to go to Bread & Chocolate in town which is a bakery/restaurant run by an American who now lives here.

Our bus wasn’t scheduled to leave until 1 so we figured we’d kill time after breakfast on the beach right next to the bus station.

After hanging out on the beach for a few hours, we headed over to the bus station only to have to wait for an extra 30 minutes (jaja tico time). Aside from being already set back by an half an hour, while on our way back San Jose we got caught in traffic because of a flood. 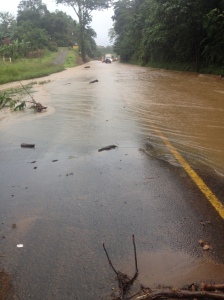 Oh … and our bus got stopped by the police. A police officer came on our bus and asked everyone for the passports and exit stamps (this proves that you’re going to leave the country). I wish I could share every little detail about my trip this weekend but I’ve gotta get myself together for classes tomorrow. 😦 ¡Adiós!